This alternative version allows you to use more of your 1000 digit images. It uses an idea from Lance Tschirhart's Shadow System. In this alternative version, everything is just as in the basic version except when a Jack or Queen appears second in a pair. In these exception cases, the suit pair and 2nd card value swap places, so that the Jack/Queen represents a vowel and the suit pair represents the final consonant. Specifically, a Jack in second place represents 'ae' (8 in the Ben System) and a Queen in second place represents 'o' (4 in the Ben System), since these vowel sounds weren't used in the basic version. As an added bonus, since the 'g' and 'd' are no longer used to represent a J or Q in second place, you have the freedom to use 'g' as an alternative to 'k' for your final consonant, and similarly 'd' as an alternative to 't'. It's probably easiest to look at the examples and use the generator to see how this works!

Back to the basic version. 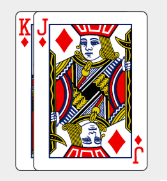 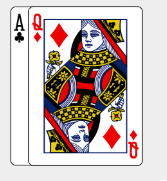 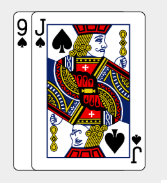 Choose a card pair using the dropdowns to see the corresponding phonetics.