I devised this system in 2016. It's a hybrid of several elements from other people's systems: the 2-block system invented by Johannes Mallow, the Ben System (consonant-vowel-consonant) for the images, but with a different mapping of numbers to cards from the one Ben Pridmore uses, and some phonetic elements from Lance Tschirhart's Shadow System.

Brief summary of the 2-block system: this means you only need 1352 images. Every image corresponds to two card pairs, one red-first and one black-first (the suit combinations are arranged in pairs below). When memorising, the number of images in a location is variable. I keep placing images in a location until I see a black-first pair, which becomes the final image in that location.

The system outlined below is the basic version. There's also an alternative version that is slightly more complex but uses more of the 1000 digit images (fewer new images needed). 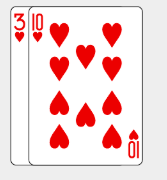 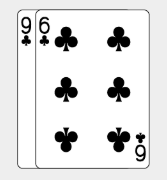 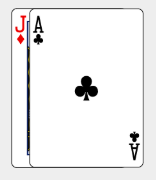 Choose a card pair using the dropdowns to see the corresponding phonetics.

Note that this mapping could be very easily adapted to a full Major System approach (consonant-consonant-consonant) simply by replacing the vowels with the corresponding consonants (a = t/d, e = n, i = m etc.). My training PB for digital speed cards using this system is 18.26 seconds.